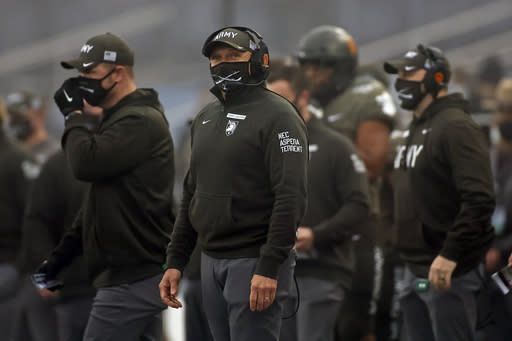 MEMPHIS, Tenn. (AP) — Army went from left out of the bowls to replacing Tennessee in the Liberty Bowl on Monday night, hours after the Volunteers withdrew because of COVID-19 test results.

The 9-2 Black Knights were left without a bowl Sunday night after a nearly two-month-long commitment to the Independence Bowl when the Dec. 26 game in Louisiana was called off without an available team to play.

A spot became available Monday when Tennessee became the first team to back out since bowl berths were announced and paused all football activities after receiving the results of Sunday’s testing.

”The test results revealed an increase in positive cases among student-athletes and staff and subsequent contact tracing,” Tennessee said in a statement. ”The decision was made in consultation with health officials, the Southeastern Conference and the AutoZone Liberty Bowl.”

The change in opponent was no problem for West Virginia, the other original team in the game scheduled for Dec. 31 in Memphis, Tennessee.

The Volunteers will end their season at 3-7 with losses in seven of their final eight games. They lost 34-13 to No. 5 Texas A&M on Saturday.

Third-year coach Jeremy Pruitt is among those who tested positive. Pruitt said he was informed earlier Monday that he had tested positive and began isolating at home.

”I am experiencing mild symptoms but doing fine,” Pruitt said. ”We are obviously disappointed that we will not be able to play in the AutoZone Liberty Bowl, but the health and safety of our student-athletes will always remain our top priority.”

Hogwarts Legacy Will Have a Morality System

Scarlet Nexus Gets a New Trailer