Skip to content
Home>>Sports>>Brett Phillips Is a World Series Hero, Reminding Us of Baseball’s Beauty

ARLINGTON, Texas — This is a story about why Brett Phillips was the right person for the baseball gods to tap on the shoulder and decide, “You, young man, the career .202 hitter without an at-bat in 17 days and without a hit in 29 days, will live forever in World Series lore.”

Friday was my birthday, an event I would never expect to be on the radar of Phillips as the Tampa Bay Rays prepared for Game 3. After the Rays finished batting practice, the entire team cleared the field except for Phillips. I was standing on the Dodgers’ side of Globe Life Field, the first base side, well past first base. I looked up and saw Phillips walk all the way from the Rays’ third-base dugout, around the batting cage and along first-base foul territory. He was walking to me with something in his hand.

“Happy birthday,” he said. He extended his hand with the object.

“I got you a present. It’s a Brett Phillips autographed World Series baseball!”

“How did you know that’s what I wanted?” I cried in mock shock.

Phillips is the kind of person who if the sun decided not to rise one morning would happily fill in and nobody would notice. If he is not smiling, check his pulse, because it’s probably an indication breathing and blood flow have ceased. Phillips plays Major League Baseball the way we imagined as kids we would if we ever were so lucky to have that chance: with gratitude, with grace, with a pinch-me-I-can’t-believe-I’m-here wonderment that never wanes and, of course, with a smile.

The next day, before Game 4, we reunited at the batting cage.

“You know, Brett,” I told him, “I was secretly rooting for you to have a walk-off hit last night. That way that baseball would be worth a lot more.”

“You know what? You’re right,” he said. “I owe you one. I owe you a walk-off hit before my career is over.”

He made good before the night was over.

Phillips was the last man standing–and dog-piled to the point of nearly passing out–in one of the craziest endings ever to a World Series game. So much comedy and drama happened on one play that you could watch it several times over and not be certain what just happened. It was the baseball equivalent of The Usual Suspects.

The quick inventory of it all went like this: the Dodgers invented a new all-time worst way to lose in their oeuvre of horror playoff shows over the past eight years, the Rays went from being on the verge of elimination to seizing momentum, and Phillips, like Don Larsen, Luis Sojo, Brian Doyle and David Freese, went from near anonymity to writing the first page of their obituary on the national wires.

Every once in a while, appearing like a double rainbow, a $20 bill on the ground or, yes, a birthday present you actually wished for, a baseball game reminds you why baseball is the best, the most democratic and the most karmically satisfying games man ever invented. World Series Game 4 was one of those games.

The Los Angeles Dodgers held their third lead of the night, 7-6, and were one strike away from getting the ball to Clayton Kershaw in Game 5 to pitch them to their first World Series title since 1988. They could not kill the clock, as other sports allow.

As long as Tampa Bay had one strike left, it had a chance, which is all that team needs. Also unlike other sports, the Rays could not choose who would take the last shot, the last veritable snap. The baseball batting order is a wheel of fortune, but an orderly one. Elementary schoolyard rules apply: you must take turns.

At this last-gasp moment, the wheel fell on the turn of Phillips, the 28th man on a 28-man roster who was in the game as the right fielder only because he pinch-ran the previous inning.

As Phillips jogged into the dugout for the bottom of the ninth, Paul Hoover, the team’s field coordinator, told him, “You’re batting fifth.”

Phillips had not taken so much as a practice swing during the game, such are the remote odds that he might actually get an at-bat. He is on the roster to play defense and pinch run, which he did in the ninth inning of Game 2 for Randy Arozarena.

“Randy kind of gave the stink eye like, ‘What are you doing out here?’” Phillips said.

(Phillips was set to replace him on defense in defense of a lead, and he is actually a hair faster than Arozarena.)

Phillips quickly grabbed a bat, raced to the indoor batting cage behind the dugout and took five emergency swings. Then as he hurried back to the dugout, he said out loud to himself, “Let’s go win this game.”

With one out against Dodgers closer Kenley Jansen, Kevin Kiermaier reached base on a bloop single while holding the sawed-off handle of his bat. The next batter, Joey Wendle, smashed a drive to the left-center gap, but Joc Pederson ran it down.

One out away from going up three games to one, the Dodgers had to deal one more time with Arozarena, who hit his record-breaking ninth homer earlier in the game, seven of which have come against fastballs 93 to 97 mph.

“Attack, be aggressive,” Jansen said Prior told him. “[But] you can’t let him beat you. Don’t be stubborn. He’s putting good swings on fastballs.”

Prior also reminded Jansen who was on deck: the sunniest .202 hitter who ever lived, a guy who was 0-for-5 with four strikeouts over the previous month.

Jansen badly bounced a 3-and-2 slider to Arozarena, his way of saying, “Bring on Brett Phillips.”

“Everybody wants to be in that situation,” Phillips said, “and that’s exactly what was going through my head.”

Phillips is a Tampa Bay kid, from Seminole, Fla., who grew up rooting for the Rays. He followed them to the 2008 World Series when he was in eighth grade. He speaks of former Ray Dan Johnson the way Yankees fans speak of Ruth, DiMaggio and Mantle.

He had no reason to be so confident, that is, if you only go by the cold, clinical evidence of statistics. More than two weeks without seeing live pitching. A .184 career hitter off the bench, a .171 hitter against relievers, a .155 hitter with runners in scoring position, a .105 hitter on 1-and-2 counts (which was the corner in which Jansen painted him).

All of it didn’t matter because of the radiance of his belief.

“It didn’t matter that I didn’t have an at-bat in the last two weeks because I would not be on the World Series roster if they didn’t think I could help them win in any way,” Phillips said. He first thanked God, and called such power in thinking positively, “Having just an unrelenting belief that things would work out for the best.”

Jansen threw a cutter. What happened next wasn’t just an all-time World Series moment. It was a series of moments. It unfolded like the opening scene of Saving Private Ryan, in a cascade of catastrophe and cacophony.

Phillips sent everything in motion with a single into center field. Watching it fall, Jansen crumbled to his knees on the mound.

Kiermaier, a fast runner going with two outs, was going to score easily. Center fielder Chris Taylor, who had replaced A.J. Pollock, who had replaced Cody Bellinger and his sore back, made the first of horrible Dodger mistakes in triplicate. As he bent to field the hit, Taylor in his unnecessary haste let the ball get behind his field of vision and behind his feet. The ball hit the webbing of his glove and popped up in the air, escaping from him like a dog that broke its leash. Tragic error No. 1.

Seeing that, third-base coach Randy Linares waved Arozarena home. Taylor picked up the ball again. As Arozarena touched third base, his helmet flew off. In his next two steps he began to lose balance. Taylor, without setting his feet, threw to the infield to first baseman Max Muncy, the cutoff man.

Arozarena completely lost balance. He didn’t stumble so much as he fell forward, like a skier catching an edge. Like a falling skier, he tucked a shoulder and rolled to soften the blow of landing. Without losing momentum, he popped to his feet and saw Muncy throw home, to the first base side of catcher Will Smith.

Arozarena was going to be so far out that Dodgers manager Dave Roberts already was thinking about who would pitch to Austin Meadows leading off the next inning. Arozarena was so convinced he was out he began heading back to third.

But Smith panicked. As he reached for Muncy’s throw, Smith hastily turned to tag Arozarena before he even had the ball. The baseball flicked off the edges of his glove to the backstop. Tragic error No. 2.

The backstop at Globe Life Field is only 42 feet from home plate, in honor of Jackie Robinson. It is the nearest backstop in baseball. Surely, Jansen, backing up home, could throw out Arozarena.

But Jansen wasn’t there. In his despair over the hit he never made it behind the plate. He lingered in the infield interior as if disoriented by what was happening. Tragic error No. 3.

Seeing this, Arozarena reversed field again and dashed home, covering it with a headfirst slide made necessary only by his complete exhaustion.

Phillips, making like an airplane with his arms out, sprinted with pure exuberance into the outfield. He looked like a little boy running home from school, running fast enough only to feel the joy from the sensation of cool air running through his fingers and whooshing past his ears.

And isn’t that why we love baseball? We can bemoan modifications in pandemic baseball, the pace of game, the parade of relievers (11 just in Game 4), the strikeouts, the lack of action … but the special moments that bring alive the inner child in us is what keeps us coming back.

Wonder. Possibilities. Surprises. Seeing the world through your younger self’s eyes. These are the rewards for believing in baseball. You get a night like this, when a kid from Tampa Bay wins a World Series game for his hometown team with no reason for it to happen other than the power of belief.

“That’s why I think baseball is so special,” Phillips said. “Anybody can come up on any given night, especially the Tampa Bay Rays, and help the team win.

“I definitely want to extend some advice to all the kids out there: keep dreaming big. These opportunities, they’re closer than you think. And they can come about. Just keep dreaming big, kids, and having an unrelenting belief that it will happen and … it does. Things like this happen.”

About five minutes after it happened, Phillips could barely breath. He gasped for air in the Rays’ dugout. The emotions, not to mention all that airplane running and dogpiling in the outfield, had pushed him to the brink of passing out. People around him gave him some room to gulp in some air. Revived, he climbed the stairs back to the field for interviews.

He saw me, and when I raised a fist to do a socially distant fist bump, he pulled me close and hugged. 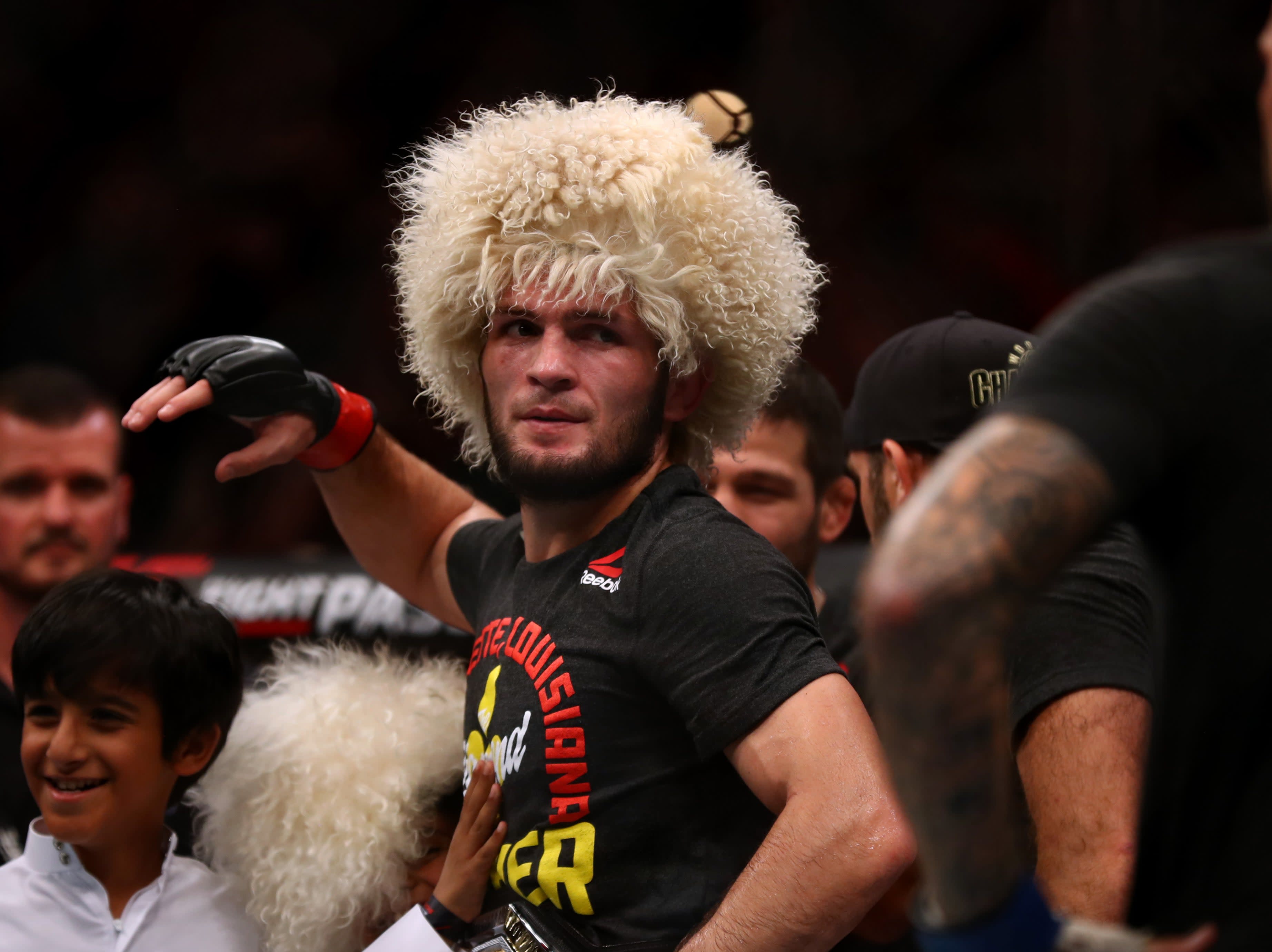 UFC 254 start time: When is Khabib vs Gaethje and how can I watch it?

Was Close To Committing Suicide During My Stint With Yorkshire, Says Azeem Rafiq | Cricket News