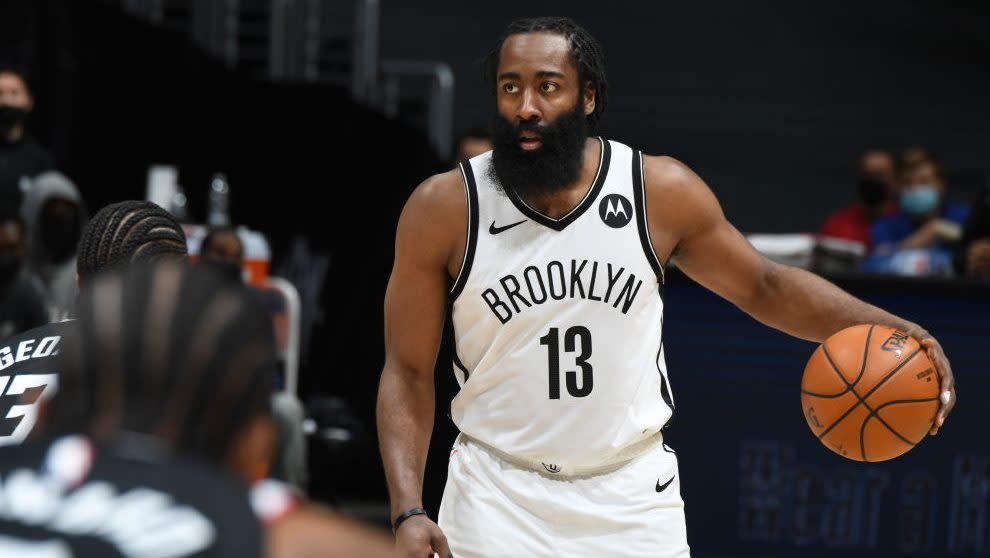 LOS ANGELES — James Harden played a masterful game Sunday, scoring 37 points with 11 rebounds, controlling the flow as a facilitator, and leading the Nets to a win over the Clippers and a sweep of the two Western Conference powerhouses in Los Angeles. The Nets have gone undefeated on a five-game road swing through the West — four of those wins without Kevin Durant — and Harden is at the heart of this surge.

But all people were talking about Sunday night was Harden’s flopping. Or, since it was in Los Angeles, call it acting.

After a DeAndre Jordan tip-in had the Nets up 110-108 with :11 seconds left, the Clippers final meaningful possession saw Kawhi Leonard drive past Harden and use his body to get in position to tie the game with a lay-up (and maybe get an and-1) — instead the referee saw this as an offensive foul.

It should have been a no call — Leonard was physical to get to his spot, but Harden sold the contact and got the referee’s whistle. It was never reviewed. We’ll see what the NBA’s Last Two Minutes Report says about the play tomorrow (those tend to back the official on the court when it can), but that is not a call an official should make in the final seconds of what had been an entertaining Sunday game between two of the league’s top teams.

“My take from it is we’re gonna play bully ball at the end of the game, let it go both ways. But they didn’t call it, so good defense,” Leonard said postgame, before then saying “alright” and walking out of the press conference room.

“They called it, there’s nothing you can do about it…” Clippers coach Tyronn Lue said. “It is what it is.”

It was a missed call, but the Clippers didn’t lose the game on that final shot.

They lost it because they couldn’t slow the high-powered Brooklyn offense — Harden and Irving combined for 65 points — and the Nets switching defense had the Clippers reverting to an isolation form of basketball rather than the ball movement that has made them the second-best offense in the league this season.

The Clippers defense has been pedestrian all season — 15th in the league coming into the game — and Sunday Harden and Irving shredded it. Brooklyn came off picks and got into the lane all night, scoring 60 points in the paint and having 31 shots at the rim. None was bigger than the Jordan tip-in off an Irving miss that won the game for Brooklyn.

Harden was a big part of the Nets’ offensive success. He has thrived in the facilitator role since coming to Brooklyn.

“We’ve got to do a better job of pick-and-roll defense,” Clippers big man Ivica Zubac said after the game, adding the Clippers did force a lot of floaters, which had been a goal, but the Nets hit them.

Defensively, the Nets are getting better — they’re not good, but better. They have a system, they switch a lot, and while there are some ugly lapses, they are improving and getting some stops. Jordan had two key blocks on Clippers shots in the final five minutes, providing some of the rim protection Brooklyn needs to make their system work.

Lue noted the Clippers got the switches wanted — Landry Shamet on Kawhi or Paul George, for example — “but we couldn’t get to the basket, we couldn’t force the doubles we wanted.”

“We just fell into the trap,” George said. “Their defense does a lot of switching. We tried to manipulate the matchups, got off our game of moving the ball.”

Irving had 28 points and eight assists for Brooklyn. Jordan, Bruce Brown, and Joe Harris had 13 points a piece for the Nets, who have now won six in a row.

Paul George scored 34 points on 12-of-19 shooting, while Leonard added 29 points on the night. Zubac was the only other Clipper in double figures with 13.

Check out more on the Nets

Pierre-Luc Dubois with a Goal vs. Vancouver Canucks