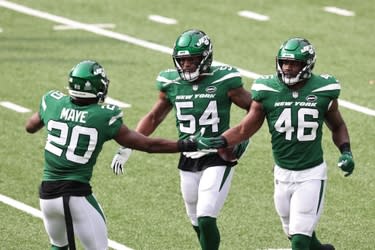 The Steelers will send a 2022 fifth rounder to New York for Williamson and a 2022 seventh round pick.

Williamson will be going from the one side of the spectrum in the league to the other, with the Jets at the bottom of the league at 0-8, and the Steelers as the only unbeaten team in the NFL at 7-0.

Per Vacchiano, The Jets had renegotiated Williamson’s salary in the final year of his contract, so the Steelers will only owe him about $1.45 million.

Williamson was thought to be among those Jets who could be on the trading block, and with the NFL trade deadline less than 48 hours away, the fire sale could just be beginning.

The seven-year veteran appeared in 7-of-8 games for the Jets this season, racking up 50 total tackles (second most on the team) and an interception. He has yet to record a sack this season.

Williamson came to the Jets after four seasons with the Tennessee Titans and was among the best defenders New York had in 2018. Then during a preseason game in 2019, he tore his ACL and missed the entire season.

Manish Mehta of the New York Daily News was the first to report on the trade.

More to come as new develops…

You Can Now Preorder Sakuna: Of Rice and Ruin | COGconnected