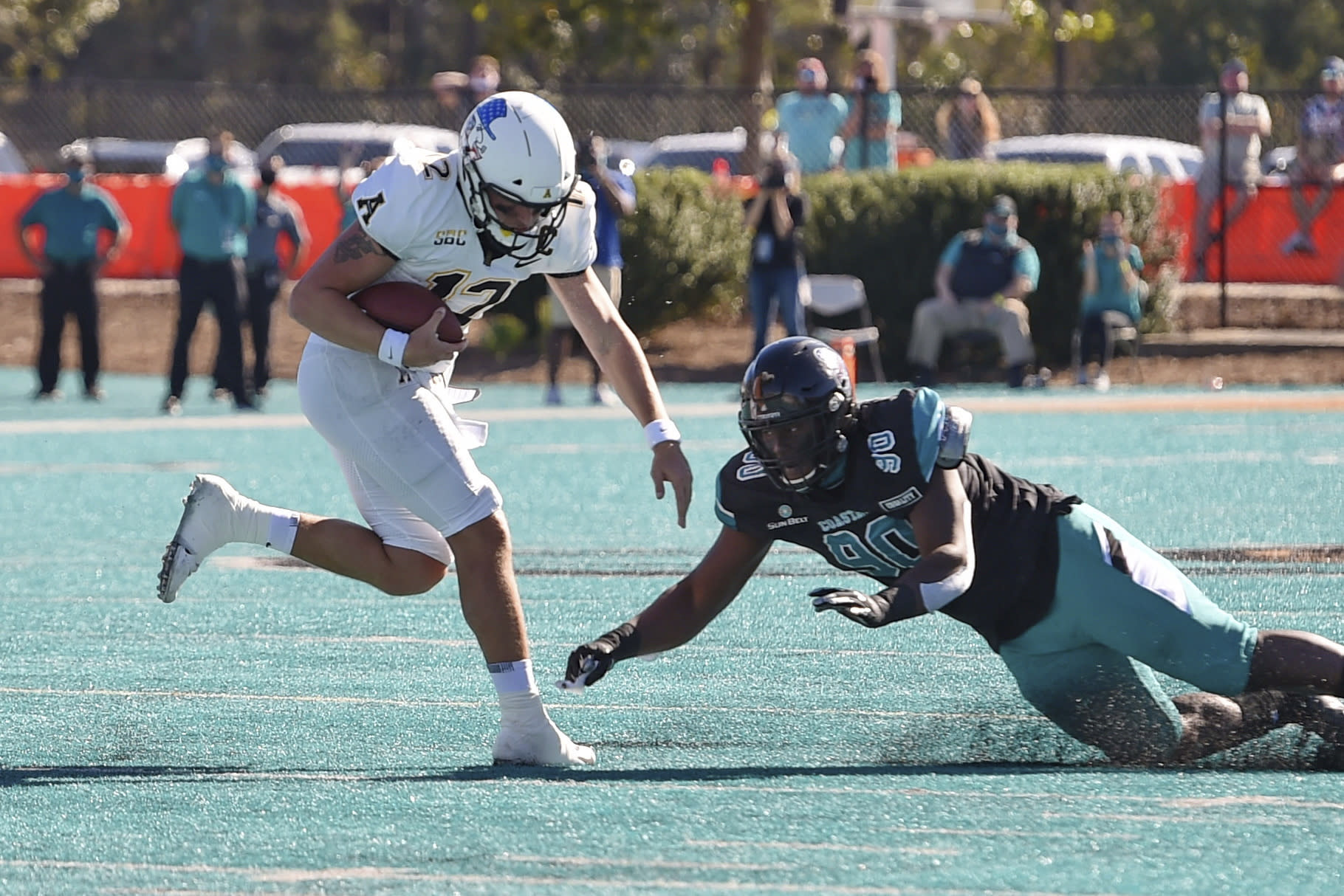 CONWAY, S.C. (AP) — Reese White scored the go-ahead touchdown on a 3-yard run with 2:24 to play, and No. 15 Coastal Carolina continued its perfect 8-0 start with its first-ever win over Appalachian State, 34-23 on Saturday.

The Chants (6-0 Sun Belt Conference) had lost all six previous games to the four-time defending Sun Belt champion Mountaineers. But they held Appalachian State to just two field goals in the second half after falling behind 17-9 at halftime.

The Mountaineers tried to rally after White’s score. But D’Jordan Strong intercepted Zac Thomas’ 4th-and-22 pass and returned it 38 yards for a touchdown to clinch it.

Coastal Carolina, picked last in the Sun Belt in the preseason, is now a victory away from winning the league’s East Division and playing West winners Louisiana-Lafayette for the conference title next month.

The Chants play at Texas State next week and a make-up of a COVID-19-postponed game at Troy on Dec. 12. In between is a potential undefeated showdown against No. 22 LIberty on Dec. 5.

Coastal Carolina freshman quarterback Grayson McCall threw for 200 yards and two touchdowns and rushed for another 69 yards and a score. Wide receiver Isaiah Likely had 118 yards receiving and a score, and the Chants’ defense forced three turnovers, all interceptions, off the usually steady Thomas.

Two of those came in the second half, when the Mountaineers led twice. Appalachian State, thanks in part to Camerun Peoples’ huge first half, was up 20-15 after a 36-yard field goal by Chandler Staton a little over four minutes into the third quarter. Less than five minutes later, McCall hit C.J. Marable for a 19-yard touchdown to push the Chants in front.

It stayed that way until the scores from White and Strong.

Thomas threw for 211 yards and a touchdown, and Peoples finished with 178 yards rushing, although nearly all of those came before halftime.

Appalachian State: The Mountaineers almost assuredly lost out on a chance to play in the Sun Belt title game but remain on solid footing for a bowl berth.

Coastal Carolina: The Chants are expected to improve upon their No. 15 ranking as they inch up for the chance to play in a New Year’s Six bowl game.

Astros’ Correa on Sweep of Twins: ‘What Are They Gonna Say Now’

Bungie Is Permanently Removing Their Official Halo Site Next Month