Thanks For the Memory

Given the massive shift to downloading games rather than buying physical copies – a shift that’s inspired Sony to debut a diskless version of the PS5 – memory is more important than ever when it comes to consoles. Gone are the days when all you needed was an external memory card, with games often requiring installation, even when they come on a disk – such as the massive The Last of Us: Part 2.

While the console’s base memory of 825 GB may seem huge, it’s worth noting that The Last of Us: Part 2 would occupy close to 10% of that space after installation, and as games will continue to get more and more advanced they’ll naturally require more and more memory in order to play. Memory’s becoming absolutely crucial, however Sony today confirmed that the PS5 won’t support SSD Expandable Storage at launch, despite having a dedicated slot for this.

If you’ve been following the updates for the while you may already know that PlayStation Hardware Architect Mark Cerny already cast doubts on whether the SSD Expansion would be available at launch, saying that “It’d be great if that happened by launch, but it’s likely to be a bit past it, so please hold off on getting that M.2 drive until you hear from us.”

‘
The reason for the delay is that not all SSD Drives are fast enough to keep up with the PS5, and so rather than launching with the feature enabled Sony are waiting until they’ve worked out the kinks in the system. Unfortunately, this may mean that some current SSD drives will be incompatible with the PS5.

The good news is that external USB storage will still be available from day one, so while you may not necessarily benefit from lightning fast speeds, you’ll at least be able to benefit from the extra space.

What do you think of the news? Let us know in the comments, on Twitter, or on Facebook.

It won’t be a year without a Santa Claus, as malls turn to portable igloos and virtual visits to save the holiday tradition 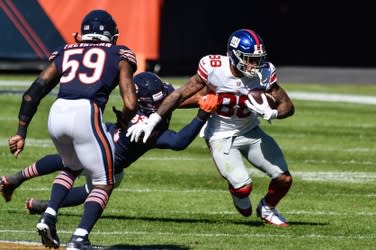 6 players the Giants could deal away before NFL trade deadline