Skip to content
Home>>Sports>>Three things to know: Draymond Green goes on a rant — and he’s right 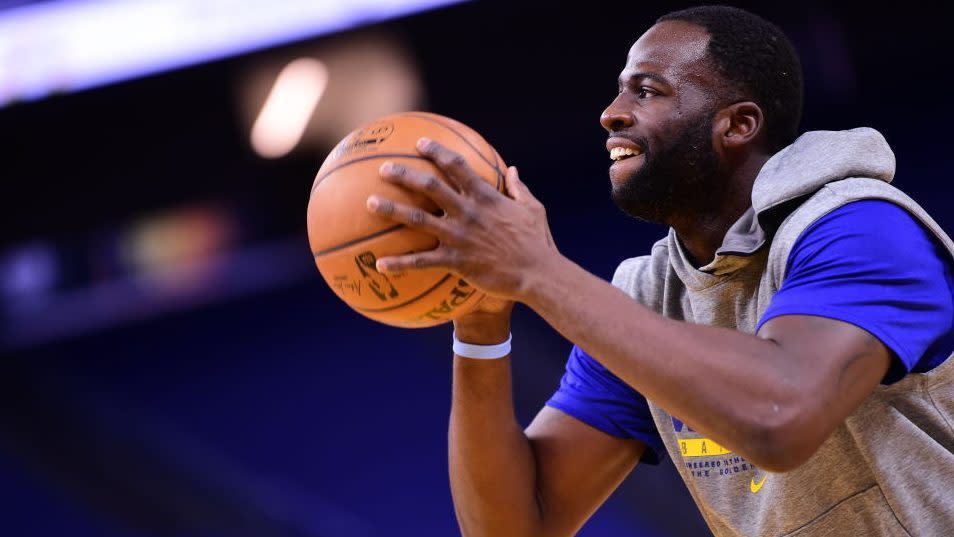 The NBA season is in full swing, and we will be here each weekday with the NBC Sports daily roundup Three Things to Know — everything you might have missed in the Association, every pivotal moment from the night before in one place.

1) Draymond Green goes on a rant — and he’s right

Before Golden State thrashed Cleveland Monday night, Draymond Green watched Andre Drummond — the Cavaliers starting center for most of the season — come out and warm up, then go back and put on his street clothes to watch the game. Drummond was sitting out because the Cavaliers want to trade the center and don’t want to risk him getting injured. The trade deadline is a month away, on March 25.

That pissed Draymond Green off.

After the game, he went off to the media about how players are treated by fans and the press when said players push for a trade vs. what happens when teams do the same thing.

“At some point, as players, we need to be treated with the same respect and have the same rights that the team can have. Because as a player, you’re the worst person in the world when you want a different situation. But a team can say they’re trading you. And that man is to stay in shape; he is to stay professional. And if not, his career is on the line. At some point, this league has to protect the players from embarrassment like that.”

There is a double standard. The Cavaliers all but sent out a press release saying they want to trade Drummond, but if James Harden had publicly demanded a trade he would have both been vilified and faced a massive fine from the league. Anthony Davis took a $50,000 fine because his agent said Davis wanted out of New Orleans, as Green noted. The argument that the player has a contract to honor doesn’t hold water. This is about perception and being treated fairly, not what a team is allowed to do. The double standard does exist.

Green may be right, but I doubt this ever changes. Fans will not — and probably should not — see things his way. Fans don’t want to think of the NBA as the cold business it is; they are emotionally invested in their team, their favorite player. If you’re a huge Rockets fan and Harden asks out to join a super team, yes, you’re going to see this as a betrayal of loyalty, a breaking of a bond. Same with Durant in Oklahoma City or Davis in New Orleans (or the rest of a long list). If you’re a fan of most other teams, you have to think “there but for the grace of god” because it could happen to you as well.

In the case of Drummond and Blake Griffin in Detroit, the ugly part of this is the “sit and wait” could last a month, then they will be asked to step back on the court like nothing happened. Never forget the NBA is a cold business.

About those guys Green is defending…

It’s going to be a challenge for Cleveland and Detroit to find a fair trade for Drummond and Griffin, which could drag out until the deadline for both.

Both Drummond and Griffin can still provide real value on the court and help a few contenders, but the challenge is money — both players have huge contracts. Drummond is making $28.8 million in the final year of his contract and then becomes a free agent (so a team is either paying a lot to rent him for half a season, or they need to pay up and re-sign him next offseason). Griffin is making $36.6 million this season with a player option (he will pick up) for $39.9 million next season.

Toronto has already kicked the tires on a Drummond trade, reports Shams Charania of The Athletic, which makes sense as they have missed what the combination of Marc Gasol and Serge Ibaka gave them in the paint in recent seasons. Drummond’s efficient 17.5 points a game, strong picks, and 13.5 rebounds a game — he is one of the game’s best rebounders — has real value. He can help the Raptors, and other teams may call.

However, the only way to really make a Drummond trade work is to send back a worse or longer contract to Cleveland, a game the Cavaliers don’t want to play. This is not Harden in that his value on the court will bring a boatload of picks and young players back. Other teams will be looking to dump salary for Drummond, likely longer-term salary than what Drummond makes.

If no deal is found, there will be no buyout for Drummond, league sources told NBC Sport (there was buzz about the Nets wanting him off the buyout market, that’s not happening). If no trade is found, he will return to the Cleveland center rotation (with Jarrett Allen and JaVale McGee, the latter of whom could be traded as well).

Blake Griffin is going to sit out in Detroit until a trade or buyout happens. In this case, a buyout distinctly is on the table. The only question is would Griffin give up some of the money he is contractually owed to get out of Detroit and become a free agent? If so, how much?

Griffin has done an amazing job over the years of growing and expanding his game, but his body has betrayed him in recent years. Griffin has battled injuries and it has shown this season, with him averaging 12.5 points a game and shooting 36.5% overall (and 31.5% from three). Griffin is a smart player and a gifted passer, but he’s become more of a face-up, midrange shooter in recent years. After he sets a pick now what happens? He’s not the roll guy he used to be, and with those shooting percentages teams want him to pop out.

Maybe a trade comes along for Griffin, but the buyout seems more likely. Once that happens and he is a free agent, there will be interest from contenders to bring him in at the minimum (or into an exception slot the team has).

3) Lakers without Anthony Davis 2-3 weeks with calf strain, but expect it to be longer

The good news for the Lakers is this is just a calf strain. Davis had just missed a couple of games with Achilles tendinosis, and when the injury happened against Denver it looked like it could be much worse.

Anthony Davis leaves Lakers-Nuggets after suffering a lower leg injury. He was grabbing at his Achilles, but walked off gingerly under his own power.pic.twitter.com/wLtXrrrDQP

Davis is out and will be re-evaluated in 2-3 weeks. Expect him to be out longer. The Lakers and Davis want to be cautious here, so don’t be surprised if he is out until after the All-Star break (at least March 10).

Davis is one of the game’s elite players and is averaging 22.5 points and 8.4 rebounds a game for the Lakers, more importantly, the team’s offense is 7.1 per 100 possessions better when he is on the court, and he is one of the anchors of Los Angeles’ league-best defense.

The Lakers will miss Davis, but they will be fine. The Lakers are 21-7, sit as the two seed in the West, and are still going to win a lot of games with LeBron James and company until Davis returns. The Lakers are title favorites for a reason, but they need Davis and James at close to 100% to win another ring — this is a top-heavy roster.

The Lakers are focusing on the big picture, on games in June and July when they will need Davis. They can give up a couple in February and March to make that happen.

Check out more on the Lakers

Nintendo Has Announced the First Nintendo Direct of 2021

Lara Croft Might Be Next Seen in a Fortnite Crossover | COGconnected