Skip to content
Home>>Sports>>Texans throttle Lions, 41-25, in what may be Matt Patricia’s final game as head coach 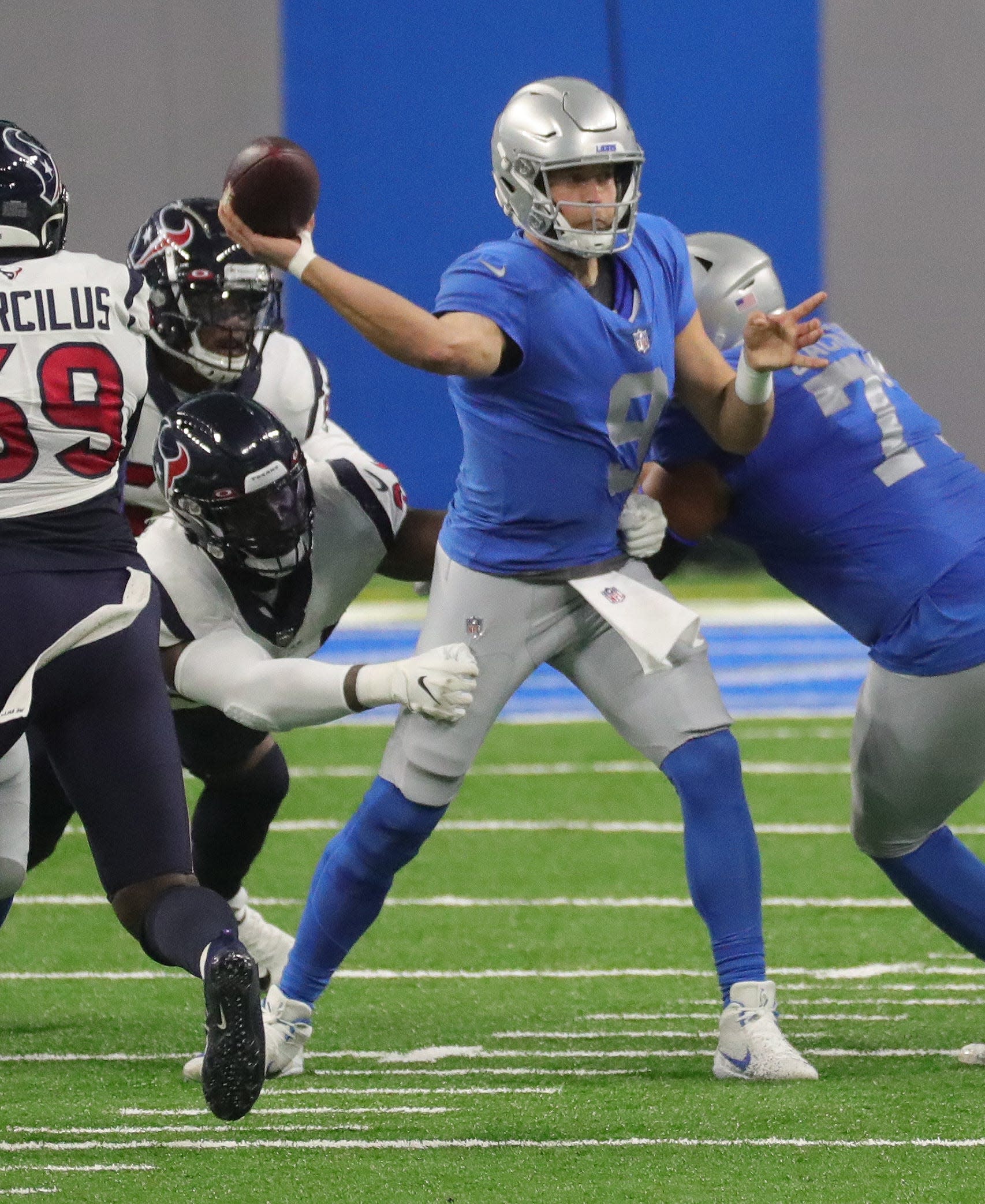 The Detroit Lions have not been able to beat good teams under Matt Patricia, or most of the bad ones, and they should soon find out if they can do either with a new coach.

Deshaun Watson threw for four touchdowns and had a near-perfect passer rating and the Lions committed three first half turnovers in a 41-25 loss to the Houston Texans at Ford Field on Thursday.

The loss was their biggest Thanksgiving defeat since a 45-24 pounding by the New England Patriots in 2010.

The Lions have lost four of their past five games, all by double digits, and at 4-7 are in last place in the NFC North.

[ Today should be Matthew Stafford’s final Thanksgiving start for Lions ]

With 10 days before their next game, general manager Bob Quinn – or owner Sheila Ford Hamp – must decide whether to bring Patricia back for the final five games and let him finish out what surely will be his final season as Lions coach.

The Lions are 13-29-1 under Patricia, a .314 winning percentage, and have looked sadly uncompetitive in many of their games. Five of their seven losses have come by double digits, and on Thursday they got embarrassed on national television.

They turned the ball over three times in an eight-play span in the first half and allowed a late touchdown on a 34-yard trick play throwback from Deshaun Watson to Will Fuller.

Hamp has not spoken publicly since taking the ownership reigns from her mother, Martha Firestone Ford, in June. At the time, she said Patricia and Quinn, in his fifth season as GM, needed to show “major improvement” from last year’s 3-12-1 record in order to return for 2021.

While the playoffs are still a mathematical possibility, “major improvement” seems like an impossible bar to reach now.

The Lions went 3-4 in a just-completed stretch where they played six teams with sub-.500 records in a seven-game span, and their next four opponents are playoff contenders.

The Lions last fired a coach midseason in 2005, when Matt Millen fired Steve Mariucci days after a Thanksgiving loss to the Atlanta Falcons.

In the 15 seasons since, they have had four winning seasons, made the playoffs three times and cycled through four permanent head coaches, including Patricia.

Watson completed 17 of 25 passes for 318 yards and had his way with a shorthanded Lions defense that played without cornerback Jeff Okudah and defensive linemen Trey Flowers and Da’Shawn Hand, and lost cornerback Desmond Trufant to a hamstring injury in the first half.

The Lions actually opened the scoring with a 1-yard run by Adrian Peterson, then turned the ball over on three straight possessions against a Houston defense that entered Sunday with an NFL-worst five takeaways in its first 10 games.

Matthew Stafford started the comedy of errors with a careless interception on a swing pass to Peterson that J.J. Watt tipped to himself and returned 19 yards for a touchdown. Stafford has thrown eight interceptions this season, and three of them have been returned for touchdowns.

Jonathan Williams fumbled on his first carry of the season on the Lions’ next play from scrimmage, and the Texans scored four snaps later, after a Reggie Ragland pass interference penalty in the end zone, on a 2-yard Watson pass to C.J. Prosise to take a 13-7 lead.

The Lions committed their third turnover six plays later, when Kerryon Johnson lost a fumble deep in Houston territory, but Jamie Collins forced a Texans fumble one play later to set up Peterson’s second touchdown of the game.

Jack Fox’s ensuing kickoff went out of bounds, giving Houston the ball at the 40-yard line, and the Texans capitalized on the favorable field position. Duke Johnson beat Jamie Collins for an easy 33-yard touchdown, and the Texans led 23-14 at halftime.

The Lions opened the second half with a 14-play, 68-yard drive, but were forced to settle for a field goal after Patricia lost a challenge on a Jamal Agnew pass to Stafford that would have given the Lions the ball inside the 1. The Lions opened the drive with 10 straight rushes, the first nine of them designed running plays.

From there, it was all Watson and Houston, which scored on its next three possessions to go ahead 41-17 before the Lions added a garbage-time touchdown.

Fuller had six catches for a game-high 171 yards and two touchdowns, Johnson had 80 yards from scrimmage one week after he had 15 yards rushing on 10 carries in a win over the New England Patriots, and Watson finished with a 150.4 passer rating.

This article originally appeared on Detroit Free Press: Detroit Lions lose to Texans in what may be Matt Patricia’s final game

Serge Ibaka with a dunk vs the Oklahoma City Thunder